The true value of travelling

We are Daniel and Christoph and live our dream. Although we are both fundamentally different, we share a great passion: travelling.

We founded DRAKENSBERG because we want to inspire people to recognise the true value of travelling and to strive for it. To understand the way as a goal and to grow. Because we believe that a good journey can change a whole life. Our travel bags are silent reminders of the spirit of the 19th and 20th century, when travelling was an adventure and travellers were adventurers.

The journey that changed our lives took us across South Africa almost 20 years ago. When we wanted to travel by car from Cape Town to the Drakensberg Mountains. And yet we were never meant to arrive there.

And that is our story.

When we met for the first time about 25 years ago, we were both on a winter holiday together with our families. Our common passion snowboarding, at that time rather a "marginal sport", inevitably brought us together. The many adventures on the slopes quickly turned into a close friendship which has grown to this day.

It was in the middle of 2001 when Daniel travelled to Cape Town for a semester abroad. Due to the tight schedule, Daniel was not able to see much of South Africa in the first few months. He was eagerly awaiting the intermediate exams, as there would be no classes for 2 weeks afterwards. As the time period slowly approached and Daniel slowly wanted to start planning the route, unfortunately there was no one among the fellow students who wanted to accompany him on this trip. So Daniel didn't think for long which of his friends at home he could spontaneously inspire for such a trip. A few minutes later, Christoph's phone rang and a few days later Christoph landed at Cape Town International Airport.

The idea was to drive off the coast, through the hills via Oudtshoorn, then along the coast via Port Elisabeth, East London and Kokstad to the Drakensberg Mountains. On the way back we want to take the legendary Garden Route back to Cape Town. But it turned out differently. We lost our heart to South Africa. To the hospitality, the breathtaking landscapes, the incredible wildlife and of course to Braai and South African wine. The South-African way of life.

On our trip we stayed overnight, mostly spontaneously, in Bed & Breakfasts, which we booked beforehand during the trip. Our hosts, sometimes farmers, sometimes emigrants, sometimes retirees, always welcomed us with open arms and brought us closer to South Africa. As different as our host, as different are the stories and the culture. A reflection of diversity that makes South Africa so unique. That's why many “good byes” were difficult for us and sometimes we liked the places so much that we stayed there for another night. So the 2 weeks were over faster than a bottle of Pinotage is drunk.

The impressions we were able to gather during these 2 weeks were so emotionally powerful that we can't forget them to this day. It is just as difficult to name the absolute highlight as it is to not name supposedly smaller highlights. There was the de Hoop National Park, which fascinated us with its endless sand dunes and lonely sandy beaches. Or the excursion to Hermanus, where we absolutely wanted to watch whales and were on the verge of resignation when we could watch a whale mother with a newborn whale calf in a lonely bay from close range. Or the jump into the almost 400m deep gorge below the famous Bloukrans Bridge, with 213m jump depth one of the four highest bungee facilities in the world.

After a while it was clear to us, that we would never reach the Drakensberg Mountains on this trip. But soon we realized that this wasn’t so important anymore. And we came to the conclusion what the essence of a good trip really is. It is not about ticking off places on a list and quickly taking a few souvenir photos. A good journey means learning. About life and about yourself. The DRAKENSBERG brand will always remind us of this experience. Because the way has been our actual goal.

During production, we pay attention to high-quality and sustainable materials such as vegetable-tanned leather and genuine canvas cotton fabrics, which are dyed AZO-colour-free. Our bags are handmade, which makes each piece truly unique. The entire supply chain is socially responsible and is regularly checked by us on site. 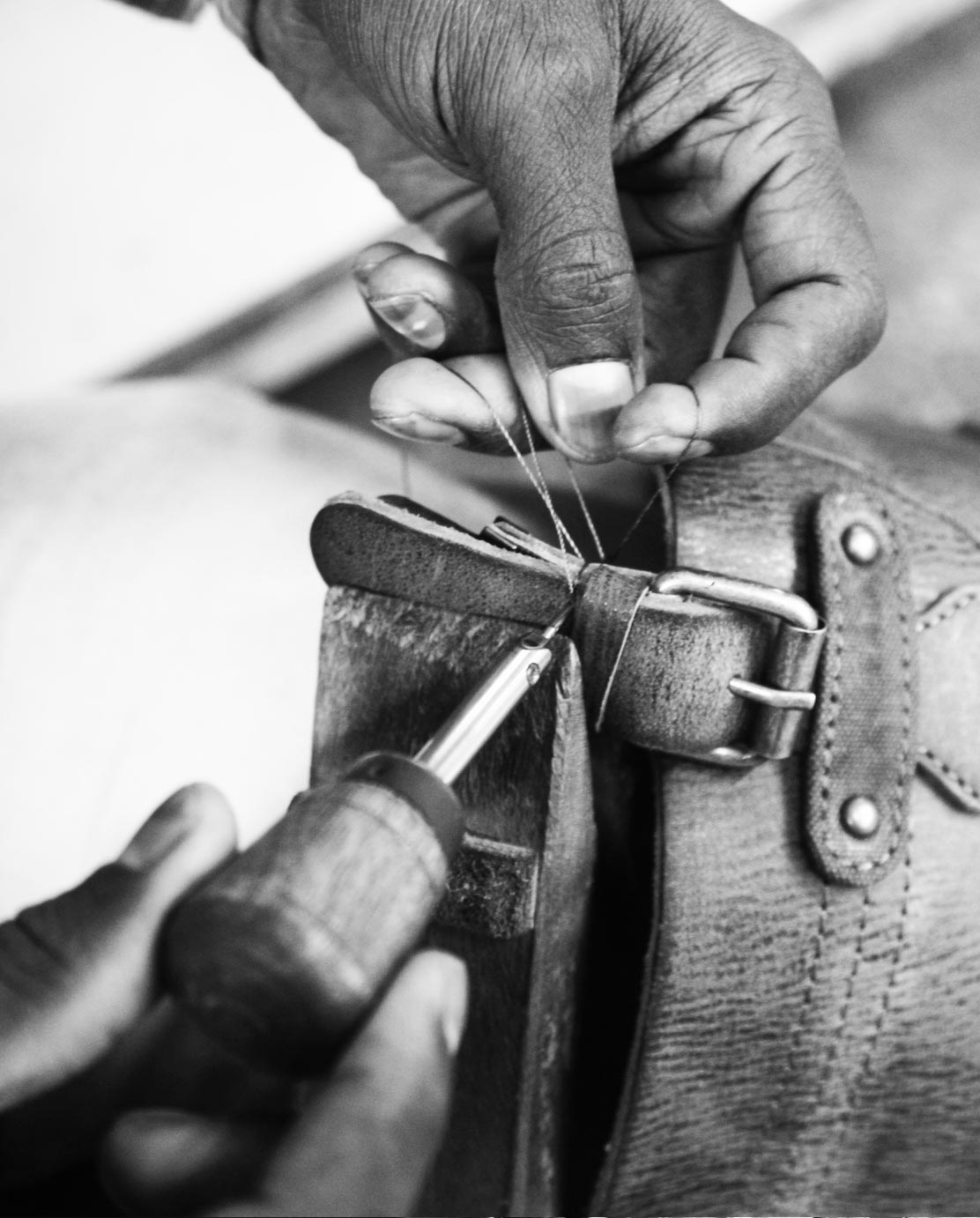 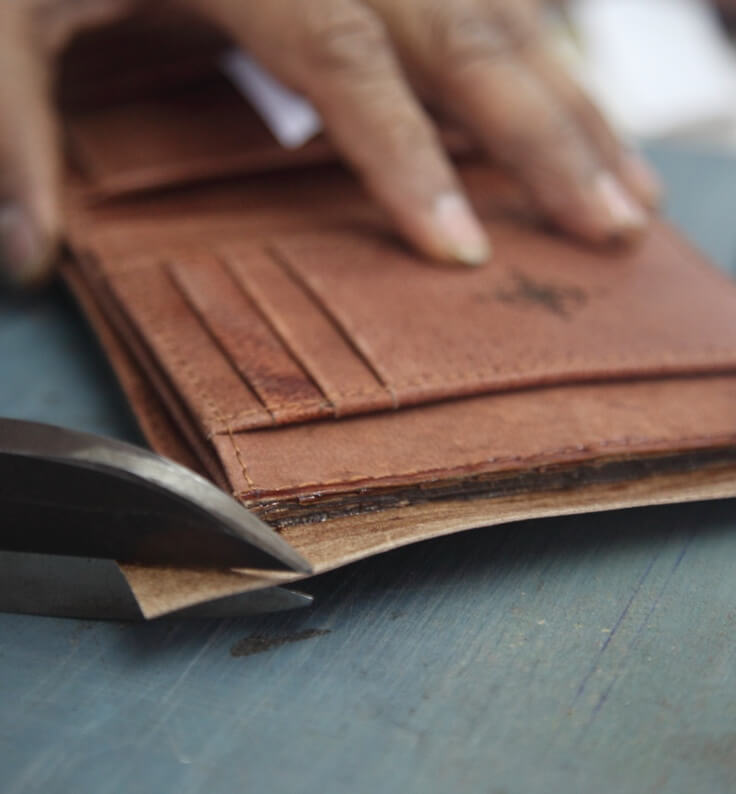 We get inspiration for our product design from our travels, history books and historical travelogues. To revive the iconographic design of the 19th and 20th centuries, we combine original craftsmanship with the current zeitgeist. Each product goes through a multi-stage design process to ensure the highest possible functionality and quality.

Before further processing, the leather skins are cut by hand. When dividing the leather skins, we make sure that there is as little waste as possible and use it almost completely. Even the few remaining leather pieces are still used - for small applications or our accessory collections.

All fabrics used for our products have been woven especially for us. In contrast to many of our competitors, we use pure cotton fabrics and thus follow our historical models. The process of dyeing is followed by an elaborate "aging process". The fabrics are washed with sand and then machine-dried again to achieve the desired vintage look. Afterwards they are cut to size.

After cutting, the leather and fabric sections are shaped, rolled and glued by hand. This provides stability and support. In addition, individual pockets are reinforced with linings in this step.

Now the prepared leather and fabric pieces are joined together to form a whole. The bag gets its final shape. This is the only step in the entire production chain that is carried out with the help of machines. The thick leather that gives our bags their stability requires an enormous amount of force during processing, which only special high-performance sewing machines have.

The required metal parts are manufactured according to our design specifications. They are made of brass and after production they receive a special antique finish, which is applied to the metal by a galvanic process. The production of the metal parts is done by machine, but the final attachment to the bag needs to be done by hand.

After production, each bag is quality inspected. Special attention is paid to the control of the seams. In our manufacturing process, only unique items are created - no two products are alike. The characteristics that make each piece unique include colour variations and shading. This is our statement against uniformity, towards products with soul, which are as unique as their owner.
Drakensberg © 2021
designed by
Log in
Shipping

With Klarna Sofortüberweisung you can make a direct bank transfer for the purchase. For this you must have online banking activated with your bank account to use this payment method. After you have clicked the buy button, you will be directed to Sofortüberweisung. Here you can make a bank transfer with a TAN generator and your bank card. Afterwards you will be directed back to Drakensberg.
This payment method is free of charge for you.

The goods are delivered worldwide.

No shipments are made to the following foreign islands: France: overseas territories and departments, Netherlands: non-European territories, Cyprus: Northern part

We calculate the shipping costs for Germany with: 4,95€ flat rate

We calculate the shipping costs abroad as a lump sum as follows:

Unless otherwise stated in the article description, the delivery of the goods in Germany will be made within 3 - 5 days, in case of foreign deliveries within 5 - 10 days after order confirmation (in case of agreed advance payment after the date of your payment instruction).

Please note that no delivery will be made on Sundays and public holidays.

Stay up to date!

Register for the newsletter and get
10% discount
for your next order!